(Another in a series of posts about the inspiration and the history behind BLUE FIRE, my new mystery novel, which is NOW available on Amazon at a special New Release Price – 99 cents through April 15th)

And now, for my final post about my new book, I’d like to reveal the real inspiration for it – a building.

As I was finishing Dark Sky, the first book in my Max Bowman series, I became obsessed with a structure I would see across the East River from Roosevelt Island, where I live. It’s an old apartment building, fifteen stories tall, and built in the late 1920’s, right as the epic Wall Street crash that triggered the Great Depression was happening. 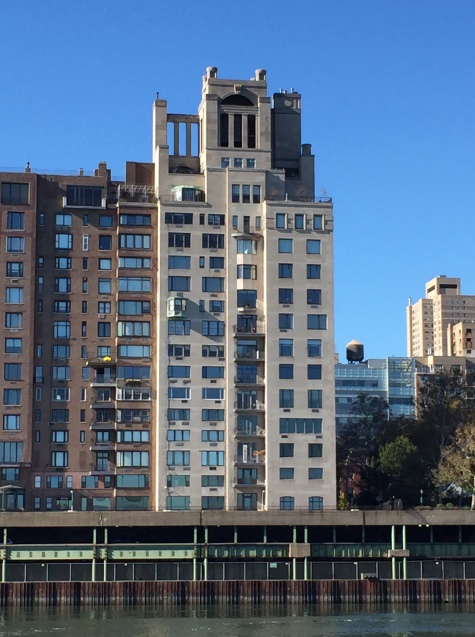 What I was most fascinated by was the rooftop, which had a series of posts and pillars that resembled some sort of ancient temple structure. Okay, what it really looked like was the rooftop from the climax of the original Ghostbusters. Which made sense, since that building, located at 55 Central Park West, was built the same year and with the same Art Deco sensibility.

Anyway, when I did more research on the building, I found out I wasn’t the only one who admired it. Tom Wolfe, famed white-suited New Yorker and author of Bonfire of the Vanities, named it one of only 42 “good buildings” in the Manhattan area. Madame Chiang Kai-Shek, former First Lady of China, lived there until her death in 2003 at the age of 105. Gloria Vanderbilt also lived there with her son Anderson Cooper – and, sadly, in 1988, her other son, Carter Cooper, committed suicide by falling to his death from the terrace of her apartment (which they movingly discuss in their new book, The Rainbow Comes and Goes).

Another fun fact about the place? It was originally built right on the waterfront, where there was a private club of sorts at the foot of the building. Unfortunately, a few years later, the FDR expressway was constructed right outside its front door – so the club was demolished and waterfront access blocked off; the bottom two floors ended up being walled off from the highway (and the East River) and are now only accessible from the sidewalk by two flights of stairs leading down to the first floor, where the windows have bars on them and the only things on the narrow walkway in front of them are trash cans. Those creepy below-street-level floors inspired even more creepiness in my novel.

A lot of bad things happen in this building in my book – both at the top and the bottom of it. Actually, some weird stuff happens in the middle floors as well. All in all, in Blue Fire…you want to avoid the place at all costs.

Oh, and stay out of the park across the street from it at 3 a.m. as well…

Oh yeah, the book…as it says on the top of this post, the “official” release starts today, Friday, April 8th – and the eBook will be on sale for $.99 for the next week.  I hope you’ll check it out.