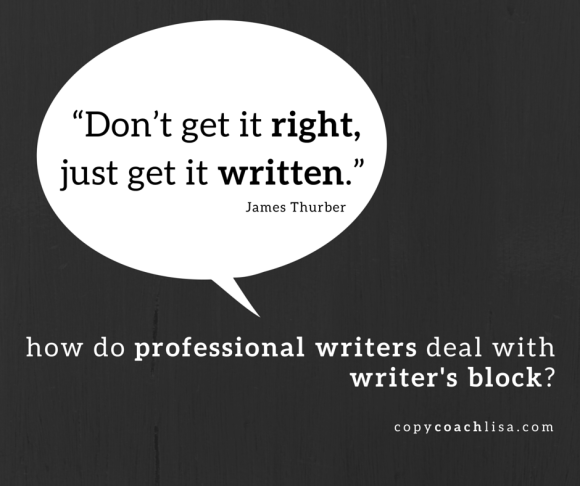 I’ve said before that, when your job is writing, writer’s block is pretty much an occupational hazard. Spending hours making up stuff every day, day after day just about guarantees that at some point, your brain is gonna check out and say, “we’re done here.”

And if it happens to the pros, it probably happens to you. So what can you do about it?

The playwright and essayist Paul Rudnick, who I think is hilarious and brilliant, is famous for saying, “Writing is 90 percent procrastination: reading magazines, eating cereal out of the box, watching infomercials. It’s a matter of doing everything you can to avoid writing, until it is about four in the morning and you reach the point where you have to write.”

That sounds about right.

Anne Tyler, who wrote The Accidental Tourist and lots of other great books, struggles so much with writer’s block that sometimes she has to force herself to work. “The one ironclad rule is that I have to try. I have to walk into my writing room and pick up my pen every weekday morning.”  Why? Because she also said, “If I waited till I felt like writing, I’d never write at all.”

In fact, some of the best writers in history have used tricks and little motivational phrases to basically force themselves do their jobs. Norman Mailer told himself, “Being a real writer means being able to do the work on a bad day.” James Thurber’s mantra was “Don’t get it right, just get it written” (which is so pithy and clever it probably took him a whole day to come up with it). And William Faulkner advised, “Get it down. Take chances. It may be bad, but it’s the only way you can do anything really good.”

That one I know from personal experience.

I’ve followed just about all of that advice and tons more over the years. Eventually, I combined the best stuff – the stuff that worked for me – into a just-about-foolproof plan to beat writers block. And right now, I’m sharing those tips in a little guide I wrote called, oddly enough, The Positively True Actual Professional Writer’s Guide to Beating Writer’s Block. You can download it for FREE HERE! – it’s quick and simple and, best of all, it actually works.

I hope you’ll check it out. After all, as Mark Twain said, “The secret to getting ahead is getting started.”

By Joel and Lisa Canfield

Joel & and Lisa Canfield are bestselling ghostwriters, expert copywriters, and are apparently married as well. This is their blog where they write for themselves when they're not too busy writing for other people, which, admittedly, isn't all that often. Find out more at www.gethipcreative.com (or just Lisa at www.CopyCoachLisa.com).

1 reply on “How do Professional Writers deal with Writer’s Block?”

I have been a writer my whole life and I must confess I don’t believe in writer’s block. That is not to say there haven’t been times I’ve struggled – usually after I’ve taken a few days away from writing to tend to other business. Tricks and tips may work for some and that’s great, but personally I believe you have to write you way out of the slump. One of my favorite quotes about this is by Ralph Keyes, “Serious writers write, inspired or not. Over time they discover that routine is a better friend than inspiration.” Thanks for the inspiration!